My Life as a Roust-A-Bout 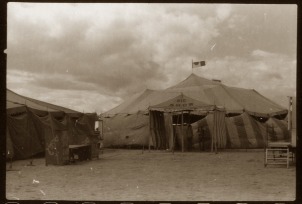 Now those of you un-familiar with the circus and "Carnie" community, there is a whole unique vocabulary associate with these clans. A Roust-a-bout is generally someone who joins on for the ride, and does various duties such as putting up the tents, taking tickets, and an assortment of odd jobs. It's not your PhD type of job and that pretty much sums up my work-mates. As for accommodations - well - it's pretty much whatever you can provide for yourself. If you're lucky one of the full-time hands will let you sleep in the cab or back of their truck or pickup. I had purchased a one-man tent just the week before at a Canadian Tire store in Sudbury. To call it a "tent" would be a real stretch. It was basically a Nylon bag with about a 12-inch clearance all around. It was also about as waterproof as a paper towel. This was to be my home, or so I thought, for the duration of my stay. 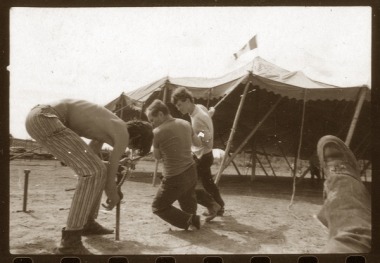 My typical day began at about 5:00 a.m. with breakfast and coffee. The stuff had been loaded up the night before so by 6:00 am the caravan moved out. I don't remember the name of the guy I rode with, but he was quite a fan of John Denver, and that was OK by me. By 9:00 we were at the site of our next show and immediately set out to unload and set up. A gang of us unloaded the telephone sized poles and huge jellyrolls of canvas. In minutes, the choreographed ballet of laying out the poles, ropes and stakes had begun along with the unrolling of the giant canvas tents. Now I'm not much with a hammer, and certainly not with a full sized sledge. After a couple of near misses, the canvas boss mercifully told me to do something else. We worked all morning and into the afternoon setting up the tents while the show people set up the Sideshow acts and numerous souvenir and candyfloss and candy apple stands. By late afternoon the smell of corn syrup and cinnamon, burnt sugar, and popcorn filled the sultry summer air. The crowds started to arrive by about 4:00. My evening job was to sell tickets to late-comers and chase away any hole-peepers, for which I got a small under-the-table bonus. To this day I don't recall how much I got paid, but it was usually enough for a hot meal and a few beers at the end of the day. 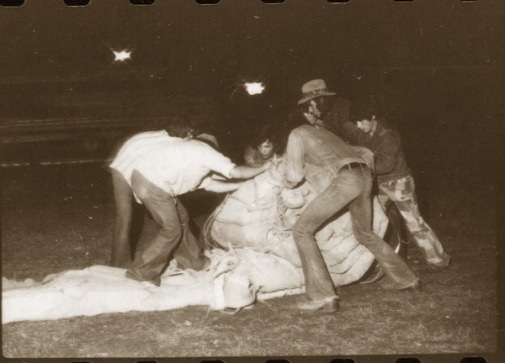 Now this glamorous life would not have been too bad had it not been for the fact that the summer of 1973 in Northern Ontario was as wet as anyone could remember. We often had to put up and tear down in a pouring downpour. This also made the canvas extremely heavy somewhat fragile. Stowing the canvas involved pushing this large jellyroll of wet canvas up a makeshift ramp of two tent poles into the bed of a covered truck On one occasion we just couldn't budge it and only managed to succeed after the canvas boss threatened to individually disembowel us if we didn't succeed. On most nights, wet or dry, we would stow the canvas, lash the poles to the flatbed, collect our meager wages and then wander off to the local bars for a few beers and a hot meal. Strangely, even in the smallest towns there were no fewer than two Chinese restaurants. After a few beers we'd meander back to our site and bed down for the night. Now because of the frequent rains, my tent was completely useless so I got to sleep on top of the crate that contained "The Big Snake". To this day I still remember the side show barker's schpeel  …."Un-go-alla_Un-Go-dilla … The She monster". I never ever saw the thing actually move the entire time I was there, but it's crate made it possible for me to stretch out in my sleeping bag and grab a few winks before we started all over again.
I do remember though one night the elephant had pulled up it's stake from the soggy ground and wandered into town. Everyone got jolted awake to chase after the thing that was happily munching at the Vegetable garden of one of the local towns people.
Now I should tell you that my main reason for being there was not just to pound stakes or haul canvas. My real purpose was to document life in the circus, which I did whenever and however I could without looking like I was goofing off. The circus bosses knew and approved of this so the canvas boss cut me a little slack here. Out of the many shots that I took, I've assembled here a collection that documents my adventure that summer.
​
My Circus Photos


You can also view a documentary about this "Tall Grass Circus" that was made in 1976 by National Film Board of Canada
http://www.nfb.ca/film/high_grass_circus/ 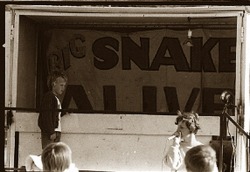